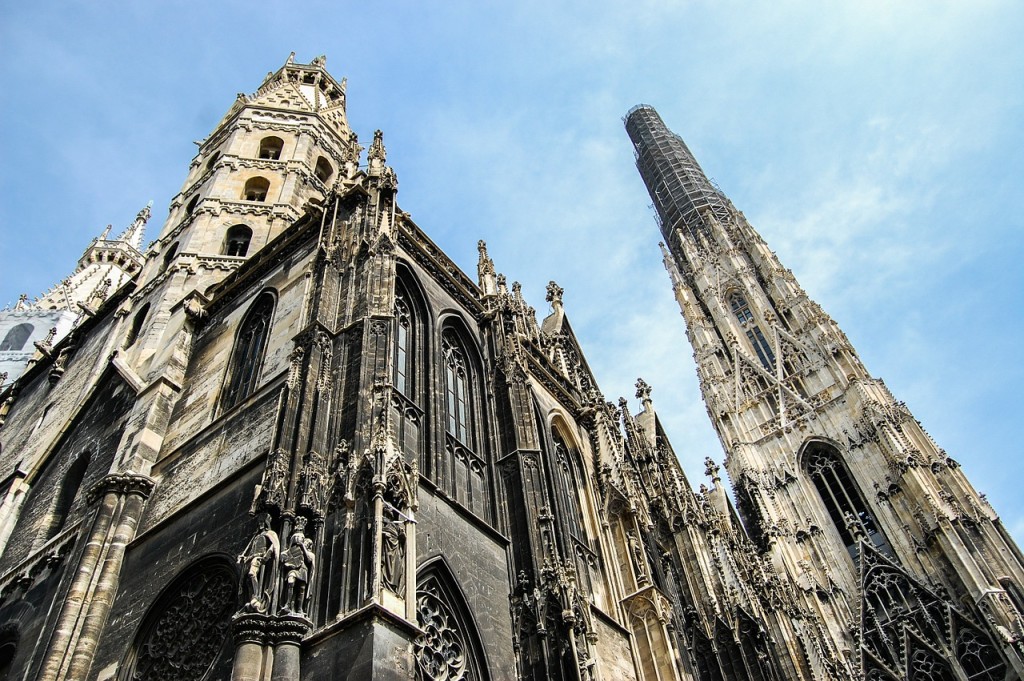 St. Stephen’s Cathedral  with its 136 m (446 ft.) high south tower is the symbol of Vienna and the most important Gothic structure in Austria. On our tour around the cathedral we find on the west side the main entrance, the so called Giant’s Door with a number of mystic figures. Next to it there are tomb stones from the former cemetery as well as the engraved “05”, symbol of resistance against National Socialism. On the south side you may admire the “Steffl”, the highest tower. One can climb up 343 stairs to the tower room, offering a great view. The unfinished northm tower houses the biggest bell of the cathedral, the “Pummerin”.  On the outside there is a memorial tablet for Wolfgang Amadeus Mozart, whose marriage and funeral took place in this church. Opposite we can see the residence of the Arch Bishop of Vienna.

Inside we admire master works of Gothic stonemasons like the pulpit, the organ base of Anton Pilgram and the Wiener Neustädter Altar. The construction of the impressive marble tomb of Emperor Frederick III took more than forty years. And why got the “Servants’ Madonna” its name?
The later influence of Barock style can be found at the High Altar and the many altars built around gothic columns. Behind the High Altar however there are original colored glass windows from the Middle Ages.  In the nave there are simple glass windows which were installed after 1945. The cathedral suffered great damage from a fire at the end of 2nd world war. The reconstruction of this emblematic building was a very important sign for the recovery of Austria after the war.