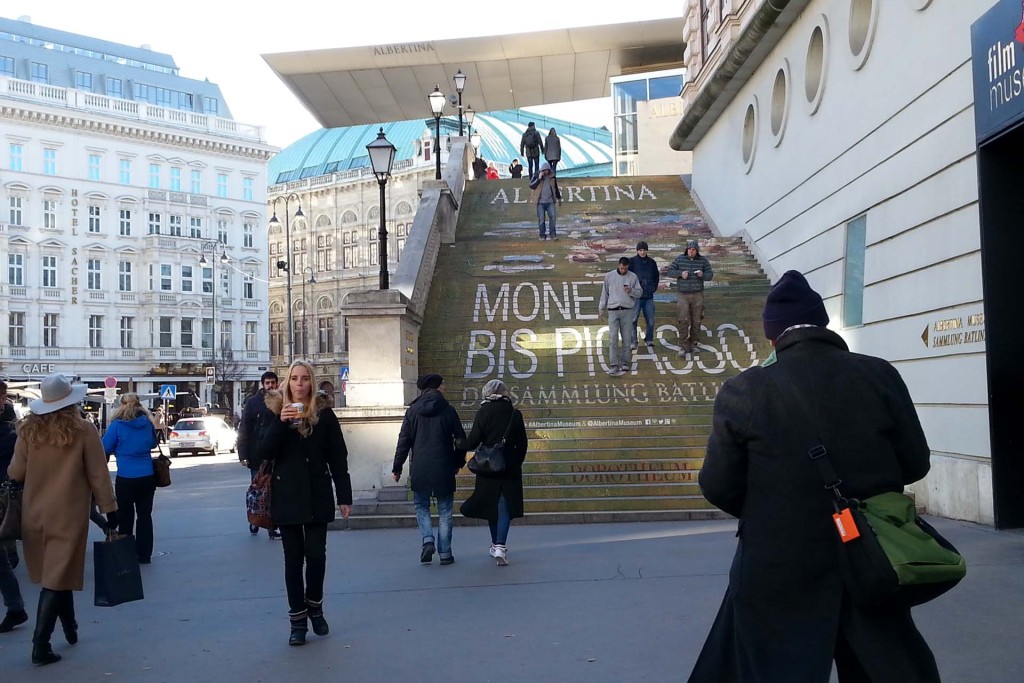 We begin this tour at Albertinaplatz square with a view of Albertina Art Museum, once the residence of Duke Albert of Saxony-Teschen. He was given permission to marry Maria Theresa’s favorite daughter, Archduchess Maria Christina. Shortly after, we see the Augustinian Church where you can admire the wonderful funerary monument of Archduchess Maria Christina. In contrast to most other members of the Habsburg dynasty, however, her wedding did not take place at this church. At Josefsplatz square, we can see the magnificent façade of the historical Austrian National Library and the façade behind which there is the riding arena of the Spanish Riding School and the Redoutensäle ballrooms. Perhaps one of the famous white horses will look out of the window at the Stallburg stables? At Michaelerplatz square, there is the splendid entrance to Hofburg Palace from the time of Emperor Franz Joseph, situated towards the city side. At the Innerer Burghof courtyard, we encounter the oldest part of Hofburg Palace, the Swiss Wing. There, the Vienna Boys‘ Choir sings Holy Mass at the Burgkapelle, the Imperial Court Chapel, every Sunday. This oldest part of the Palace also houses the Imperial Treasury. There, one can see the imperial regalia, including the imperial crowns. The Leopold Wing nowadays accommodates the office of the Austrian Federal President. Heldenplatz square shows the last expansion stage of Hofburg Palace at the time of Emperor Franz Joseph. It was from the balcony of the Neue Burg section of the Palace that Adolf Hitler announced the annexation of Austria to the German Third Reich in 1938. The Outer Castle Gate is not only a memorial site for the soldiers killed in action during World Wars I and II but also accommodates a consecration room for the resistance against national socialism.

In addition, entrance to the Treasury can be included.
Duration: abt. 2,5 hours
Guiding fee: Euro 230 per group, up to 4 persons Euro 190